Spring has finally arrived in Lansing and I had the opportunity to have a wonderful Walking Wednesday tour of the Baker Donora neighborhood with head of the Neighborhood Watch Betty Draher.

Baker Donora is bordered by Pennsylvania Ave to the East, Cedar St. to the West, Mt. Hope to the South and 496 to the North. Betty Draher was raised in the neighborhood and returned to her childhood home where she works with neighbors to continually improve it.

Baker Donora is in Lansing’s First Ward and City Council Member Jody Washington joined us for our tour.

In the heart of the neighborhood is Caesar/Donora Park which is across from Betty’s house.  It is filled with tons of green space & playground equipment in excellent condition.  Betty said that Brett Kaschinske, Director of Lansing Parks & Recreation said it was a “Front Door Park” as the houses across the street all face the park, adding to its safety because of high visibility.  She notes that the park has been much safer since removing all picnic tables and benches, which tend to attract people to sleep in the park. 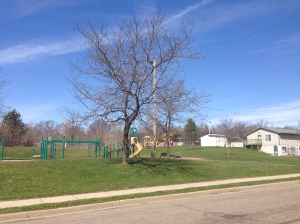 Store owner John and Betty hug, joke, and I heard them say “you’re fired!” and “I want a raise!” to each other about 3 times each. Not sure who works for whom, but they definitely work well together.

We headed north from Betty’s house to their anchor commercial property McNamara’s Party Store on Baker.

https://www.facebook.com/McnamaraPartyStore?pnref=story Owner John greeted us and was a wonderful host.  His store is a neighborhood gathering spot and he and Betty maintain an information hub within it for neighborhood notices.  Betty said she was concerned when a liquor store was coming into her neighborhood, but now has high praise and an obvious friendship with John.  She said she’s been very pleased with his business, community involvement, and facade improvements.

We headed throughout the neighborhood to see some currently vacant lots, a community garden, some beautiful homes, and some in need of serious repair or demolition.  Several neighbors stopped by to say hello and everyone knew Betty, of course.

Betty pointed out a fun fact about the neighborhood & showed us the birthplace of Burt Reynolds at 1703 Donora St. Read about it at http://lansingonlinenews.com/news/lost-lansing-burt-reynolds-native-son-and-now-wikipedia-agrees/

Betty and neighbors are working hard to continually improve her neighborhood.  Baker street is a main thoroughfare and crossover between Pennsylvania and Cedar.  She would like to see some demolitions of blighted properties to improve this entryway to her neighborhood.

I love Betty’s philosophy for getting things done.  When asked about her approach to neighborhood leadership, Betty said, “I don’t meet, I do”.

2 thoughts on “#WalkingWednesday in the Baker Donora Neighborhood”